We thank you for showing the interest in our company. Please enter the relevant information in the fields. If you require for a specific product and are not sure of the model number please provide a brief description in the description field.
We look forward to receiving your request and an AKON representative will contact you shortly.

REQUEST A CALL BACK

Please fill out the information below and our sales representative will contact you shortly.

GENERAL:
AKON’s model A20-MH251 is a critical part of our line of products which include matching receiver/tuners, fast stepping LO synthesizers, and transmit up converters for use in modern highly integrated EW/ECM systems.  These subsystems are designed so that the customer can supply his own DRFM and receiver/signal processor subsystems, leveraging the customer’s internal digital processor, software and DSP capability, and allowing the simple purchase of the required microwave components to complete the ECM system.

It has been AKON’s observation that the majority of receiver/processors and DRFMs operate with RF inputs in the range of 750 MHz to 1250 MHz, 500 MHz instantaneous bandwidth. AKON has designed a line of complementary microwave subsystems to directly interface with these customer designed items.

Integrated ECM Converter Subsystem
The Tuner (down converter), Fast Stepping LO and Up Converter work as an integrated subsystem to accept the broadband RF inputs, down convert to a 1 GHz IF for use by the RF Processor and DRFM, and then re-convert the DRFM output back up to the original RF frequency. This is done synchronously by using the same LO source for both up and down conversion processes, and the same IF frequencies in both converters. Both converters incorporate digitally controlled attenuators to compress the input RF dynamic range down to 40 dB for use by the DRFM, and then to proportionally re-expand that range back in the up-converter. Both converters also incorporate high speed SDLAs so the customer has real time information on instantaneous Rx and Tx levels. The up-converter has sufficient output power to drive most HPAs be either solid state or TWT. See sections below for more detailed descriptions of the individual modules.

TECHNICAL CONSIDERATIONS:
Tuner/Receiver
This microwave subsystem accepts broadband RF input typically in the band from 6 to 18 GHz.  The Type 1 tuner has the input LNA ahead of the switched filter preselector, which minimizes passive losses ahead of the LNA, providing best NF and sensitivity.

This particular tuner is of the Type 1 configuration.  Main RF enters the unit through a limiter to prevent
accidental damage from strong local emitters, and then through a high pass filter which removes all interfering signals below 6 GHz.  There is an SP4T switch which selects either the main RF input or one of two auxiliary inputs or terminates the input into 50 ohms.  Following this switch is the tuner input LNA.

The LNA feeds an amplified broadband 6-18 GHz signal to the input preselector filter bank.  This bankconsists of three overlapping bandpass filters which divide the 6-18 band into three sub-harmonic sub bands.  This is to help eliminate mixer spurious as well as images.  The selected sub-band then is fed to the first conversion mixer.  Here it is mixed with a stepped frequency LO so as to convert the desired 500 MHz wide segment down to the first IF frequency.

The first IF stage is centered at 4.5 GHz with  a 600 MHz bandwidth.  The signal from the mixer passes through a IF bandpass filter and is then further amplified to obtain optimum drive level for the second conversion mixer.  The amplifier feeds the second mixer, where the 4.5 GHz first IF is mixed with a 5.5 GHz fixed LO to obtain a second IF frequency of 1.0 GHz.  This second IF frequency signal is amplified and then passes through a 1 GHz bandpass filter having a 500 MHz bandwidth.  This second IF filter sets the tuner’s instantaneous bandwidth to 500 MHz.

Following the second IF filter is a DCA which can be used to adjust conversion gain of the tuner so as to compress the wide input dynamic range down to the 40 dB or so that is usable by the system DRFM.  After the DCA is a power splitter which provides main IF output, as well as signal to a high speed SDLA which provides log video of the signal being output by the tuner.

Transmit Up Converter
This assembly is basically a mirror image of the receiver/ tuner, wherein the up converter accepts an input IF signal centered at 1.0 GHz and with an instantaneous bandwidth of up to 500 MHz, and using the same LO sources, conversion steps and filter banks, linearly up-converts the DRFM signal back to the original RF frequency.  The up-converter can provide output 1 dB compression point up to +20 dBm, variable conversion gain, and low spurious outputs.  Again, digitally controlled attenuators are incorporated into the RF path to provide variable RF conversion gain, so that the customer can take the 40 db dynamic range from the DRFM and expand that up to 65 or more dB at the up converter output.  SDLAs are included post variable gain so the customer again can monitor real time transmitted signal amplitude.

The DRFM signal enters the upconverter and passed through a 1 GHz anti-aliasing filter and then goes to the first up conversion mixer.  The LO is the same 5.5 GHz as was used in the tuner, and this gives an IF frequency of 4.5 GHz.  This IF signal is filtered then amplified to again obtain optimum mixer drive level. After the IF amplifier the signal is fed to the second up conversion mixer, where the signal is mixed with the same stepped LO signal as in the tuner, for conversion to the final RF frequency.  The up converted signal then passes through the post selector filter bank which uses the same bandpass filters as in the tuner.  The filter bank removes mixer spurious, LO bleedthrough and images.

Following the postselector filter bank is a DCA which is used to change the conversion gain so as to be able to expand the signal dynamic range by some 15 dB.  After the DCA is the final RF amplifier, which puts out the signal with sufficient power to drive the transmit HPA subsystem.

Fast Stepping Synthesized LO
Tuning of both the Tuner and Up Converter is accomplished by the third item in the set, the Fast Stepping LO.  This assembly generates all necessary fixed and variable LO signals as required by both the Tuner and Up Converter.  The LO Source incorporates a very stable and low phase noise TCXO as the key frequency generating element.  There are then comb generators, switches, filters, mixers and amplifiers arranged so that both fixed and variable frequency outputs are available for both conversion steps in both the Tuner and Up Converter.  Tuning step size can be 500 MHz (or 100 MHz) per customer requirements, and tuning speed is on the order of 70 ns.  This LO puts out the fixed 5.5 GHz signal as well as the 500 MHz stepped tuning signal from 9.5 to 18.5 GHz.  The LO has dual outputs for all LO frequencies to simultaneously drive one Tuner and one Up-Converter.  Reference inputs can optionally be provided for phase locking the LO to an external source.  An optional reference output can also be provided for phase locking the DRFM.

PACKAGING:
All three assemblies are similarly packaged in MIL grade environment-proof aluminum enclosures. RF interconnections are via SMA connectors, DC and control signals are brought in on micro-D connectors.  Units are powered from +/- 15 VDC.

SPECIFICATIONS
Note: You can select different models and submit inquiry or custom quote request with help of different options available at bottom of page. 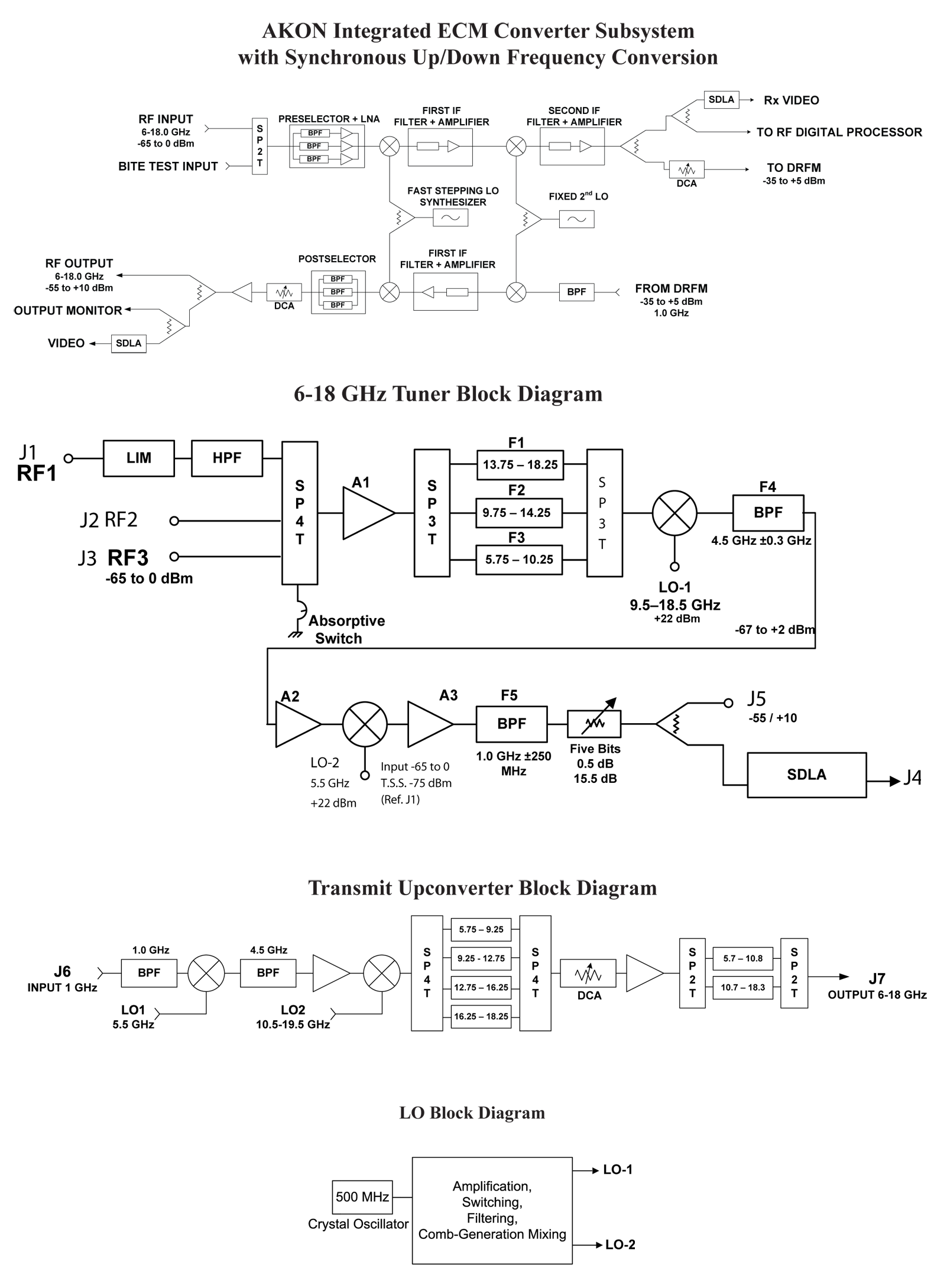 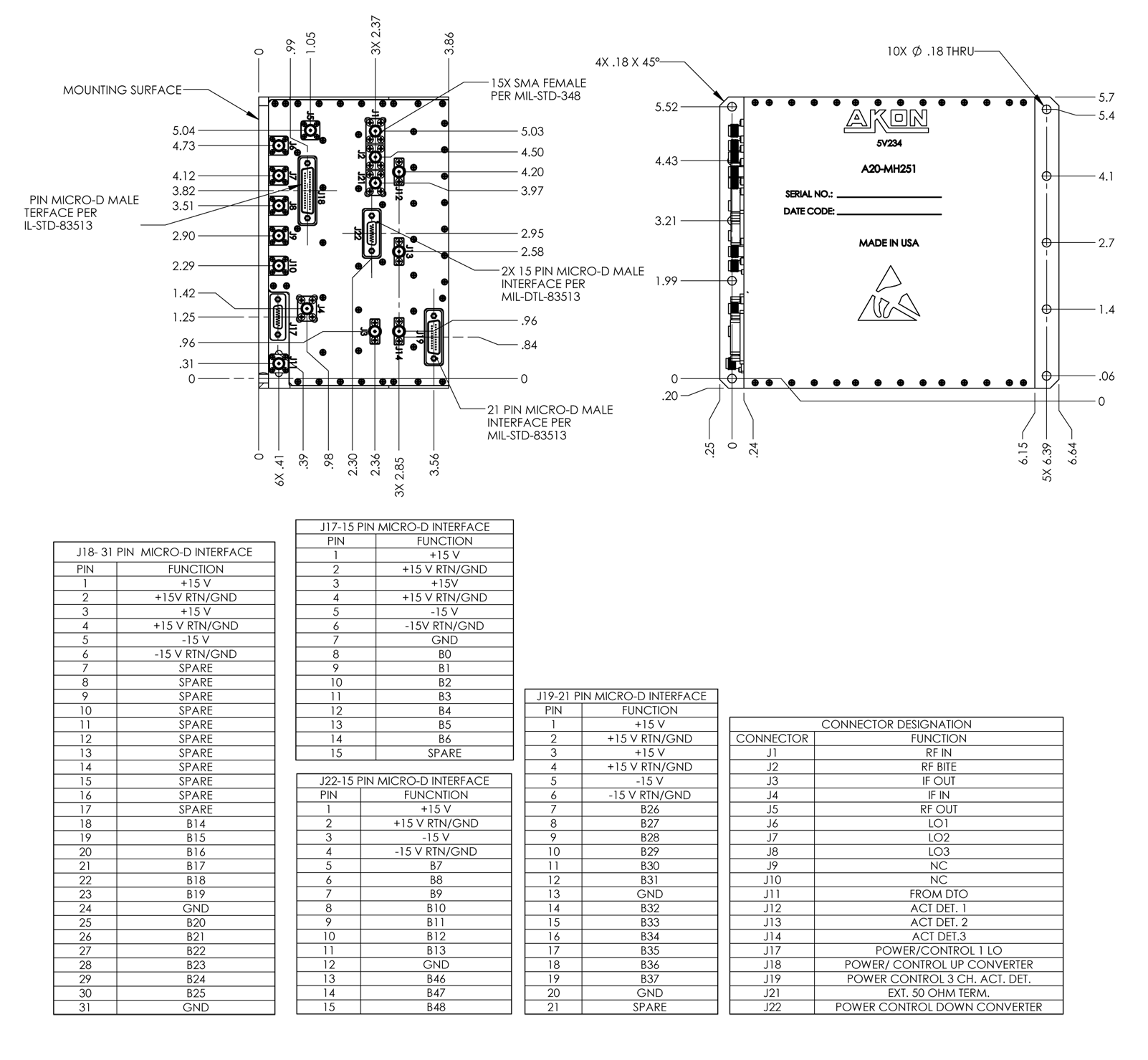